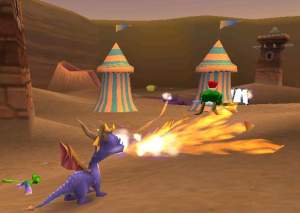 The early years of the Playstation saw the rise of many new faces in gaming, as Sony was building its brand to compete with the established franchises of Nintendo and Sega. In a robust library that saw the introductions of series like Resident Evil and Tomb Raider, the Playstation also had its share of more colorful characters that were more akin to those of its competitors. Crash Bandicoot was the unofficial mascot of the Playstation, but he opened the door for another platforming series to make its debut, Spyro the Dragon, by Insomniac Games.

Much like Crash Bandicoot, Spyro’s original studio produced a trilogy of platformers on Sony’s trailblazing home console. And while the first entry in the series is understandably the roughest, it still provides some good fun.

Spyro the Dragon was a more open-world platformer than Crash, with Spyro’s worlds being a little closer to Super Mario 64’s wide, open stages. Though in a fun twist, the worlds are their own little hubs that have a few smaller stages of their own sprinkled throughout.

Spyro’s moveset not only includes running and jumping, but he can also glide, roll, ram enemies with his horns, and breathe small bursts of fire. He’s a fun character to control, though like many early 3D platformers, the camera can become a bit tricky to maneuver.

The story is that a villainous monster called Gnasty Gnork has cast a spell on the dragons and trapped them in crystals (Spyro was so small the spell went right over him), and has used his magic to turn the dragons’ prized gems into his soldiers. It’s up to Spyro to save his fellow dragons and reclaim the treasure.

I admire the simplicity of the plot, though the opening cinematic’s presentation of having a dragon being interviewed by a news crew (with visible boom mic) before the spell hits seems a bit too jokey, and doesn’t mesh with the rest of the game.

The goal of each stage is to collect every gem (found scattered throughout a stage or by defeating enemies), freeing dragons from their crystalized state (Spyro simply has to touch them, and they then become save points), and finding the more secretive dragon eggs, which have been stolen by thieves. You don’t always have to empty a level of all its collectibles and dragons in order to progress, but completionists will have a hefty task with tracking everything down.

In a fun twist, progressing to the next world is not simply about defeating a boss, but Spyro can move on via hot air balloon depending on how many gems he’s acquired or how many dragons he’s saved. 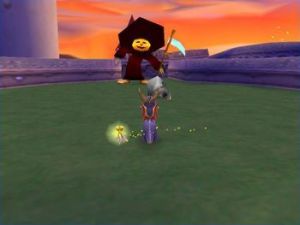 Spyro is joined on his adventure by Sparx the dragonfly, who not only grabs nearby gems, but also serves as Spyro’s health meter. Sparx can take three hits before Spyro is left by his vulnerable self. In another fun twist, replenishing health is accomplished by having Sparx eat butterflies.

The game may look dated, but it’s colorful enough to look at. The music isn’t entirely memorable, but it’s far from bad. The voice acting is fun, but Spyro’s dialogue can be a bit one note if you’re used to more varied gaming scripts.

If there’s any real drawback to Spyro the Dragon it’s simply that, today, it feels like the rough concept that would be polished with Insomniac’s follow-ups. The core gameplay is fun enough, but it doesn’t exactly boast a whole lot of variety, and at times collecting everything feels a bit monotonous. It feels like the very base of Insomniac’s concept, with the sequels adding the depth.

Spyro the Dragon remains a solidly entertaining platformer in its own right, it’s just that in retrospect, it’s easy to see how the sequels improved on it in both variety and quality. Still, if you’re wanting to revisit some of the Playstation’s early gems, or want to introduce young audiences to some retro gaming, Spyro remains a good starting point.

9 thoughts on “Spyro the Dragon Review”