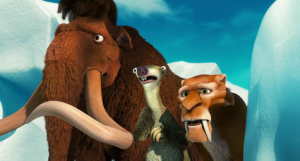 Ice Age: The Meltdown was the second installment in the seemingly never ending Ice Age franchise, a series that has always been more successful than its quality should merit. On the bright side, this 2006 sequel was released when the franchise still had some dignity. On the downside, it seems the series was already wrung dry were story is concerned.

The Meltdown begins sometime after the events of the first movie, and global warming has started to take effect, melting most of the icy world the characters inhabit (though it’s all largely intact in the subsequent films). The franchise’s heroes Manny the mammoth (Ray Ramano), Sid the sloth (John Leguizamo), and Diego the sabertooth tiger (Dennis Leary) have been living in a valley among other animals for some time. But with the glaciers surrounding the valley melting they have to hightail it out of there before they’re swept away in a flood.

Meanwhile, Manny comes to worry that he may be the very last mammoth, until he comes across another mammoth named Ellie (Queen Latifah), who believes herself to be an opossum like her adopted brothers Crash and Eddie. Ellie and her brothers join the three mainstays, all the while the usual side-story takes place where Scrat the squirrel goes through outlandish situations just to claim an acorn.

It’s a pretty thin plot, which kind of magnifies that this is an obligatory sequel and not a worthy one. It kind of feels like a road trip movie with a misplaced sense of urgency. There’s even a duo of prehistoric, recently thawed, sea-dwelling villains who are thrown into the mix to try to add some additional adversity, but their sporadic appearances and lack of voices mean they hardly have any presence.

Similarly, the movie has so many main characters that it doesn’t really know what to do with most of them. I’m fine with the story taking breaks to show Scrat’s antics, as his more cartoonish ventures always serve as a fun little detour to the main story. But while Manny has a budding relationship with Ellie, Sid gets a single scene’s worth of a plot in which he is kidnapped and nearly sacrificed by a tribe of mini-sloths, and Diego’s character is reduced to being defined by a fear of swimming. You know you have too many characters when the movie gives two of the franchise’s three main characters such forced and obligatory side-stories.

There are some fun action sequences (something the series is actually pretty consistent with), and even a couple of funny moments. The animation was decent in its day (even if the character designs are mostly uninspired), and though it doesn’t look too impressive by today’s standard’s, it doesn’t look bad either. Kids will probably find the movie entertaining, but there’s nothing much here for older viewers to get too invested in (unless you enjoy the fact that the characters say “ass,” “damn,” and “crap” within the first fifteen minutes).

Despite a few humorous moments and the strangely entertaining antics of Scrat, there’s just not enough story or depth to hold it all together.