Today, September 25th 2016, marks the twentieth anniversary of the release of the Nintendo 64 in North America!

The Nintendo 64 was quite the trailblazing console. Not only was it Nintendo’s first system capable of 3D graphics and polygonal character models, but it was also the system that really got 3D gaming right, and paved the way for the kinds of video games we see today.

Not only did many of Nintendo’s major franchises make the transition to 3D, but they also opened the door for what video games were capable of with the added third-dimension, and helped redefine a number of genres. 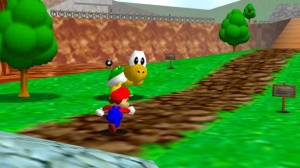 It’s true, the fact that the Nintendo 64 was entering new territory means that many of its games, while innovative in their day, haven’t aged particularly well *Cough! Goldeneye! Cough!* others have proven timeless, such as the case with Super Mario 64, Ocarina of Time, and Banjo-Kazooie. And let’s not forget that the Nintendo 64 also popularized four player consoles! Sure, these days everyone does multiplayer online, but back in 1996, playing a home console with three friends was as good as it got.

Whether it was Mario’s first steps into a 3D world, the epic adventures of The Legend of Zelda’s two outings on the console, or getting frustrated at your friends over a game of Super Smash Bros. or Diddy Kong Racing, the Nintendo 64 remains one of the most memorable consoles of all time.

Perhaps not all of its games have aged gracefully, but the Nintendo 64 accomplished things no other console had before… or since.