Unlike the mediocre 2016 reboot, the Ghostbusters of the 1980s was a cultural phenomenon, and became the most successful comedy of that decade. With video games also growing into prominence during the 1980s, it only makes sense that Ghostbusters would find its way to the world of video games. With Nintendo in particular becoming a powerhouse in the gaming industry, a Ghostbusters game of course found its way on the NES.

Too bad it really sucked.

Ghostbusters on the NES is one of the most tedious and monotonous video games ever released. In fact, it barely resembles the film in which it’s based at all.

As soon as you begin the game, you’ll find what’s in front of you to be nothing short of baffling. You have a screen that is supposed to represent a city, but instead looks like disjointed green boxes with pictures of buildings in them. In the center of this “map” is a building labelled “Zuul” (attempting to be named after the film’s villain, which is inaccurate as Gozer was the name of the villain, Zuul was one of his followers). You’ll also notice a shop, gas station and the Ghostbusters’ headquarters on the map.

So first you head over to the shop, but instead of going straight to the shop, you first have to finish a driving stage. These driving stages are played from a top-down perspective, with their fast movements and ugly graphics quickly becoming an eyesore. Here, you actually control the Ecto-1, but it looks more like a cube with a tiny Union Jack on top.

During these driving stages, you have to collect canisters of gas, which show up so spontaneously you’ll probably miss them. All while avoiding reckless drivers who go out of their way to bump into you, which results in you having to pay for the damages. If you run out of money, you can’t buy the Ghostbusting equipment, and the game is over. And if you run out of gas, two Ghostbusters come out of the car to slowly push it to the gas station, which is an absolutely needless addition to the game that only serves to make it all the worse.

Once you (finally) get to the shop, you have a variety of items to buy, but you can only hold four at a time. You can buy beams to hold on to the ghosts and well as traps to capture them, as well as ghost armor and ghost bait which are used at a later point in the game.

After the pointless shopping section, you are back on the world map, where you must find one of the squares that’s flashing red. You can enter these red squares, which will immediately take you to another driving stage. Once the driving section is over, you get to do some ghostbusting. Or, at least, an approximation thereof.

You move two Ghosbtusers, one drops the trap and shoots his beam directly upwards, while you can continue to move the other from side to side to shoot his beam at the ghosts. You just need to snag the ghosts, bring them to the trap within an incredibly short amount of time, and that’s it. Just a single screen of monotonous ghostbusting.

Each ghost you successfully capture gives you extra money, which you then need to buy more items (the first traps you can afford need to be emptied via trip to Ghostbusters HQ, but if you have enough dough you can buy one that doesn’t need to be emptied, making the original traps another useless element in the game). Thus the process repeats itself again and again. It is beyond tedious.

This formula already makes the game an absolute bore, but after maybe an hour of keeping this up, the “Zuul building” finally unlocks, which is where the formula finally changes, though not exactly for the better.

Once inside the Zuul building, the Ghostbusters must ascend an absurdly-long staircase while avoiding ghosts. In order to move the Ghostbusters, you must tap the A button non-stop, and press B to backtrack should the ghosts come closing in. If you get hit three times, the game is over, and you have to start the whole thing from the beginning.

This stair segment is when the aforementioned armor and ghost bait come into play, but they don’t do a whole lot. The armor only adds a couple extra hits to the Ghostbusters, while the bait only temporarily keeps the ghosts at bay, as once the screen scrolls upward as the Ghostbusters continue their ascent, the bait disappears and the ghosts are back on your tail.

If, by some miracle, you actually make it up the stairs, you have a dud of a final encounter against Gozer, followed by one of the most infamous ending screens in video game history.

Ghostbusters on NES is simply a disaster of a game. Everything about it is tedious and boring, with many of its elements feeling utterly pointless. On top of all that, the graphics were ugly even in their day, and the music consists of a single, out-of-tune loop of the Ghostbusters theme, which plays during the entirety of the game, non-stop!

Ghostbusters was one of the most iconic films of the 80s, but its NES adaptation should go down as one of the all-time lows of licensed games. 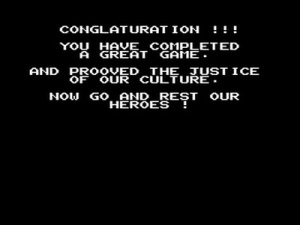