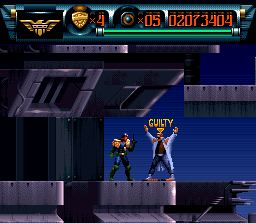 Judge Dredd is a 1995 video game, based on the 1995 Sylvester Stallone film, which in turn was based on the comic book series of the same name. Though Judge Dredd would receive another film more in tune with the comic in the early 2010s, the 1995 film is one of those “so bad it’s good” affairs, boasting the best kind of cheesy Stallone action. As such, the transition to a video game didn’t exactly have any real standard to live up to. But while the Stallone flick was chock-full of hammy action and dialogue to the point of being stupidly delightful, the SNES game adaptation just feels bland.

The Judge Dredd video game is your typical run-and-gun platformer. Dredd is equipped with a gun with limitless ammo, and can also punch and kick enemies (which, strangely, do more damage than the gun). You can jump of course, and you even have the option of arresting enemies instead of killing them by pressing the X button after you’ve dealt enough damage to them (though there’s no real difference between how you choose to deal with enemies in the long run, so it’s more of a pointless novelty than a unique game mechanic). Dredd can pick up a variety of different weapons along the way, such as grenades, missiles, and various other bullet types (which are quite limited in supply, in contrast to the standard gun).

On the bright side of things, there’s not really much wrong with Judge Dredd’s controls, though the less-than inspired objectives and clunky level design ultimately make the gameplay unmemorable.

The visuals may capture the look of the movie (which makes sense, considering the majority of them were digitized versions of the film’s sets), but the level design itself leaves a lot to be desired. The stages will usually have you navigating small labyrinths, going upward and downward while fighting enemies and avoiding traps. But oftentimes it’s hard to differentiate what is background decoration, and what is a wall that you can’t pass. In the very first level you’ll come across a pillar blocking your path that can be destroyed with a grenade. After destroying a large chunk of the pillar, you can walk past it, with Dredd himself walking behind the remains of the pillar. But if he’s walking behind it, how was it blocking his path to begin with?

Tricky visuals such as this are found all over Judge Dredd, which becomes a major distraction as the game goes on. What’s worse, what are supposed to be ladders are so thin it’s easy to miss them, and oftentimes you’ll have to crouch just so you can see where they’re located. I spent five minutes on the first screen before I crouched down for the umpteenth time and realized that skinny white stick thing was a ladder to make my way down the level.

Another downside come in the form of the game’s objectives. Before you can exit a level, you have to meet the required objectives. Usually the secondary goal consists of eliminating every enemy in the stage (or arresting them. Again, it doesn’t really matter), while the primary goal is something a bit less eventful, like destroying every crate on a stage (with these crates needing to be destroyed with the grenades, so no point in wasting them on enemies, even if they’re more effective than your gun).

The confusing layouts, combined with the lackluster objectives, just make the game feel really bland and empty. To top that off, the boss fights mark a huge spike in difficulty, with Dredd needing to bombard them for minutes before they finally let up. And of course, if you get a game over (generally by dying three times, though you can at least find extra lives in the form of badges), you have to start the whole game from the very beginning. You’d think by 1995 the ability to save your progress in a game would have caught on a little more.

In the end, I’ve played far, far worse games than Judge Dredd. But Dredd nonetheless remains an entirely unmemorable game due to its basic (though functional) gameplay being bogged down by poor level structure and game design choices.