The very existence of Wall Street Kid is a head-scratcher. Maybe, just maybe, there’s someone out there with an interest in both the stock market and video games who would like to see a game based on Wall Street, but it’s hard to imagine there’s be much of a demand for the concept. And in 1989, when gaming was aimed a bit more at a younger audience, it’s even more baffling to imagine such a concept actually came to fruition. But that’s exactly what Wall Street Kid was, an NES title centered around the stock market. Because what kid would want to delve into the magical fantasy worlds of The Legend of Zelda and Super Mario when they can experience… Wall Street?

Players take on the role of the titular Wall Street Kid, whose last name is actually Benedict (I guess ‘Wall Street Kid’ is his first name). The goal of the game is for Wall Street Kid to turn $500,000 in seed money into $1,000,000 through investments in order to prove himself worthy of inheriting his family’s fortune.

The game is basically a simplistic, point-and-click RPG of sorts. The game mainly takes place in Wall Street Kid Benedict’s office, where you can decide which companies to invest money in, and as the in-game days go by, you can see which stocks go up, and which ones go down. Just like in real life Wall Street, you’ll want to sell your stocks while they’re hot. But naturally, you can’t predict when stocks will begin to plummet, so if you wait too long to sell, you might miss out on your best opportunities.

I have to admit, there is a minor addicting quality in trying to keep up with the stock market and seeing how things play out, but it’s short lived. The game attempts to add a little something extra to the proceedings by means with little elements added to the stock market-based gameplay. You can pay a woman named Connie  for stock market insider tips (which I actually believe is illegal). This can give you a short-term advantage in stocks, though Connie’s insight isn’t always exact, so you could end up wasting money on information that provides no reward in the end (which I guess serves you right). Later in the game, you can even receive loans and go to auctions.

An additional element is added to the game by trying to keep Wall Street Kid’s love life afloat. WSK’s fiancé Priscilla will often require you to take her on dates, as well as keep up your personal health in order to keep her affections. The dating options include picnics, shopping (which doesn’t use any of your in-game currency) and trips to the carnival. Meanwhile, your health options include swimming, going to the gym, and hiking. Though the only real difference between any of these (unseen) activities is that they’ll take up more time on the game’s clock, none of them boost your love life any more than the others. But you have to keep up at these activities pretty regularly, because if you lose your fiancé, the game is over.

So basically, an entire game day should consist of buying/selling stocks, going on a date, and exercising, with an additional stock activity thrown in every here and there. Strangely, there are some days where you can’t partake in one of (or all) of the dating and exercising options, but you can always just do them the next day anyway, so it doesn’t exactly throw a wrench in your plans, making you wonder what the point of these delays is, exactly.

What hammers the final nail into Wall Street Kid’s coffin, however, is how it cheats at its own game. While the goal is to grow five-hundred grand into a million big ones, the game quickly throws a curveball at you by insisting you buy a new house with one-million dollars in cash. So the purchase of the house sets you back to step one. What’s worse is that the game presents you with the house dilemma within the first in-game month. The game presents you with the option of not taking the house, but you can only refuse it twice. If you refuse it the third time, the game will end because you failed to get the house (can’t you just wait for another house?). But it won’t end immediately after the third refusal, but after another in-game week (I guess to prolong the torture). So you have to spend your goal money on a house in the early game, when making that much money takes more time than it initially gives you. Of course you’re going to want to delay things, but if you delay it too long, you lose.

To make this conundrum worse, your fiancé will ask for a dog and a new car during this whole house debacle, which costs more money. Sure, you can refuse her wishes to save money, but that risks losing your fiancé which, again, loses the game. And a similar scenario (involving a boat instead of a house) occurs shortly thereafter, with similar aspects that work against the player. In a game all about the unpredictability of the stock market, do you really need these additional obstacles thrown at you when the money to solve these problems isn’t a guarantee? Sure, some might say the stock market in real life works in a similarly unpredictable manner, but this is a video game. Shouldn’t it at least try to make the stock market entertaining or something?

Wall Street Kid is ultimately little more than an exercise in tedium. The slight addictive nature early on may trick you into thinking there’s some hope for the baffling concept of a Wall Street-themed video game, but when the game’s sole input of gameplay is selecting the same few items from the same few menus over and over again, the game’s sheer monotony is quickly exposed. And it really doesn’t help things that the same, short loop of obnoxious music plays over the entire game. Yes, I’ve played more technically ‘broken’ video games, but few are as tedious as Wall Street Kid. 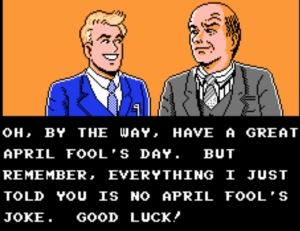 Who knows, maybe there actually is someone out there who’s enticed by the idea of a game built around the stock market, though it’s a concept that seems doomed from the start. Maybe with modern gaming hardware, that isolated individual might have a chance at playing a half-decent Wall Street game (though I doubt it). But an NES game built around the stock market was never going to work.