Nobody ever likes to be wrong. Especially in this day and age of the internet, when we can anonymously spout our views as condescendingly as possible, we don’t want to end up with egg on our face later.

But, y’know, being wrong can be a blessing at times. Case in point: I thought Dora and the Lost City of Gold – a live-action film adaptation of Dora the Explorer – looked like the stupidest movie ever based on its initial trailer. But lo and behold, it’s actually a good movie. I don’t say that ironically, either.

In my defense, what kind of expectations was I supposed to have about a live-action Dora the Explorer movie? That first trailer really didn’t do it any favors, either. It looked like a watered down Tomb Raider (it in itself a watered down version of a watered down Indiana Jones) that just used the Dora the Explorer franchise to draw in a younger crowd. But when the second trailer presented that “Can you say ‘delicioso?'” gag – in which a young Dora talks to the audience like in the series, only for Dora’s parents to look around dumbfounded as to who their daughter was talking to – it got my attention. Then when the film was released and began getting a warm reception, I thought I’d give Dora and the Lost City of Gold a look. I’m glad I did, because it is actually an entertaining and often very funny movie.

The movie begins by explaining away how the edutainment/kid-friendly series can be translated into a live-action film. As it turns out, the reason why Dora had so many adventures with animals in the jungle and other exotic locations during her childhood is because she’s homeschooled by her parents, who are professors traveling the world. Dora’s anthropomorphic backpack and map were simply products of her imagination, and her sidekick Boots is just a wild monkey that Dora liked to dress up. Humorously, Swiper – the mildly antagonistic fox from the series – isn’t explained away as part of Dora’s childhood imagination, but is indeed an actual talking, mask-wearing fox (comically voiced in the film by Benicio del Toro). The fact that certain aspects of the series are given explanation, but Swiper is as real as Dora and her parents, sets the mood for the silly nature of the movie ahead.

The majority of the film takes place a decade after Dora had her many adventures. Now 16-years old, Dora (Isabela Moner) is still traversing jungles, making discoveries, and yes, still talking to the audience (which she does via live-streaming in her teenage years, though the film still finds plenty of humor in the idea of Dora talking to the audience and breaking the fourth wall). But Dora’s parents, father Cole (Michael Peña) and mother Elena (Eva Longoria) think it’s time Dora took a break from dangerous jungle life, and to finally socialize with people her age. Dora is more than a little bummed, especially because her parents have deciphered the location of the legendary city of gold, Parapata.

Dora is sent to Los Angeles to stay with family and live a normal high schooler’s life. She is reunited with her cousin, Diego (Jeff Wahlberg) who has grown up to be a jaded teenager who’s embarrassed by his cousin’s highly optimistic and adventurous personality. I find this humorous just by the nature of it. Diego was the star of the spinoff series to Dora the Explorer, “Go, Diego, Go!,” so he was expendable in the sense that the film has no qualms with turning him into a stereotypical teenager, while Dora remains her happy-go-lucky, children’s television character self.

Naturally, Dora is a bit socially awkward, and quickly becomes the butt of jokes of the students around the school. She inadvertently makes a ‘frenemy’ in the form of the school’s know-it-all, Sammy (Madeleine Madden), and befriends Randy (Nicholas Coombe), the punching bag of the school bullies.

One thing I really liked about Dora and the Lost City of Gold is that it never feels the need to go down the “makeover” story arc in order for Dora to learn to accept herself. A lot of family movies have a “be true to yourself” message, but usually only get there by the end, with the hero (usually heroine in this scenario) needing to at first change themselves before they realize that doing so for the sake of others isn’t worth it.

Here, Diego tells Dora that her optimistic attitude, nerdy disposition, and childlike enthusiasm make her a target for the rest of the school. But Dora – rather than coming to some realization of the nature of the people around her and deciding to go the aforementioned “makeover” route – simply responds that she knows what people are saying behind her back, and that they’re laughing at her. She just doesn’t care because she can only be who she is. There’s something really refreshing about Dora’s confidence, and how a kids’ movie has a main character who is awkward and may not fit in, but who also doesn’t care about that and is comfortable in their own skin.

After adjusting to school life for a time, Dora suddenly loses contact with her parents just as they were getting close to finding the city of Parapata. Dora soon finds out why when – during a school field trip – she, along with Diego, Sammy and Randy, end up captured by treasure hunting mercenaries and wind up in Peru. 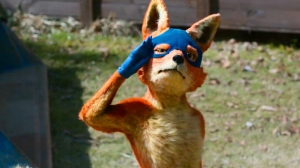 You probably want to laugh when you read such a synopsis, what with Dora taking on mercenaries and going on an Indiana Jones style adventure to a lost city. But Dora and the Lost City of Gold wants to laugh right alongside you. The film is very self-aware and often tongue-in-cheek, but not in a way that feels insulting to its source material. Yes, this is very much a kids’ movie, but it’s one that seems to be made for both young children who are being introduced to Dora the Explorer, and for the adults and teenagers who grew up watching Dora the Explorer. This is a movie that seems fueled by the very same ‘young children’s television logic’ of the series, but presents it with a coy wink and smile to the older audience. It’s a fish-out-of-water story, with said fish-out-of-water just so happening to be Dora the Explorer.

In that regard, Dora and the Lost City of Gold is actually a very smart movie. It’s easy to imagine in this day and age that a movie could have the gimmicky premise of a children’s TV character adjusting to the ‘real’ world (though in most cases these days, they would probably aim for a ‘hard R’ rating with such a concept, because Hollywood still hasn’t realized that taking cute things and making them “edgy and raunchy” is the most overplayed joke ever). But because this film actually uses an existing children’s franchise – and one as popular as Dora the Explorer no less – for such a premise, it melts away the ‘gimmicky’ aspect of it, and in turn the film is both a parody and loving homage to its source material. Dora and the Lost City of Gold is all the more entertaining for it.

I will happily admit to laughing out loud numerous times during the movie. It’s silly and fun, and in a way that doesn’t talk down to young audiences. Sure, the film may have a little more bathroom humor than I’d like, but I’m also not part of the film’s primary demographic. So if children think it’s funny, then job well done.

With that said, the film does find ways to make even that bathroom humor work within the context of Dora the Explorer. When one of Dora’s friends has to “go number two” in the middle of the jungle, the punchline isn’t so much the bathroom situation itself, so much as Dora’s attempt to make it “less awkward” by singing a song about digging a hole for her friend to use as a toilet. As you might expect, the song doesn’t exactly make Dora’s friend feel more comfortable about the situation. It’s obviously not high-brow humor, but I admit I laughed.

Admittedly, not everything in the film works. The special effects of the film – particularly the CGI used to bring Boots and Swiper to life – definitely look outdated. I get this isn’t a movie with an Avengers-level budget, but it’s always a bit of a shame how kids’ movies get shortchanged with such things, as if they don’t deserve the extra effort. Another issue is that the film’s third act might teeter a little too much into Indiana Jones territory, with booby traps and ‘jungle puzzles’ perhaps taking a little too much center stage over the humor and overall “Dora the Explorer-ness” that gives the film as a whole its charm.

I suppose some audiences might also get annoyed with how little Dora’s companions seem to contribute to the adventure. But I think Dora and the Lost City of Gold actually justifies having a main character who seems to be the only useful member of their group for two reasons: The first reason is based in the film’s logic. As the movie points out, Dora grew up in the jungle, while her friends have believed high school was as harsh as their lives could get, and have just been thrust into the jungle. So Dora, most appropriately, is serving an educational role for her team.

The other reason is more thematic. In the world of high school, Dora is a socially awkward misfit because of her adventurous attitude and profuse friendliness. But once everyone is in the jungle, the same things that Dora is mocked for in high school end up showing their many merits. While the film might at first seem like it’s laughing at Dora for her precocious nature and social naiveté, it doesn’t take too long to realize the film is actually saying that Dora’s spirit and enthusiasm – even with its basis in children’s television logic – is more genuine than the ‘real’ people of high school.

Dora and the Lost City of Gold may have a few hiccups here and there, but it’s also – beyond all expectation – a much better film than you’d think it has any right to be. It’s consistently funny and entertaining in a way that should satisfy children, their parents, and those who grew up watching Dora the Explorer and shows of its ilk. It’s humorous while also being respectful to both its target audience and source material. Special mention also has to go to Isabela Moner’s performance as Dora, which captures both the essence of the television character, while also bringing out the charisma and humor needed to make such a character work in a movie.

While Dora and the Lost City of Gold may not exactly boast the educational merits of the TV series it’s based on, I think it still has an important lesson to teach youngsters. Be nice to those who are socially awkward, and if you happen to be among them, take pride in who you are. Because if you and your friends end up lost in a jungle, we all know who everyone is going to have to rely on.

3 thoughts on “Dora and the Lost City of Gold Review”