The Dojo has amassed four-hundred blogs! Huzzah! Praise me and shower me with money!

A big thanks to all my continued readers as well as my new readers, for giving me an audience to write this stuff for.

Now then… Let’s get down to business (to defeat the Huns!).

A short while back I wrote an “ask me anything” blog, and now it’s time to answer what was asked of me. Hold onto your hats, as I have a full five people to answer! Such readership.

Revaryk asked: What are some of the games you’ve been playing lately?

My answer: Dang…that’s deep. I’m not even quite sure how to answer that. If you mean what am I proud of about myself… I suppose my creativity and my dedication. But I’m guessing you meant outside of myself, in which case there’s a lot to be proud of. I’m proud of all the people who can keep on keeping on despite all the crap that life might throw their way. Yeah, that’s a good answer. Let’s go with that for now.

(2) Who is the person (famous or otherwise) that you admire the most?

My answer: Yikes, more deep, tough questions. I’m not sure I can list just one person. I’d feel too guilty about naming just one of my siblings or other family members, so can I just lump them together so I don’t have to? Yeah, that’s a total cop out, but you kind of put me in a tight spot here.

At the very least, I guess I can name Hayao Miyazaki and Shigeru Miyamoto as famous figures I admire on an inspirational level.

Oh yeah, and I can’t forget my dog. 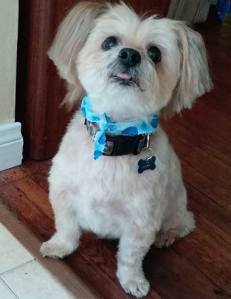 (3) What is the place you want to visit most?

My answer: Japan. Yeah yeah, totally predictable answer coming from someone who writes about video games and animated films and such. But I guess I’m a predictable person. I like Japanese culture, and they make all that stuff I like. Plus, Japan’s as obsessed with Disney’s Frozen as I am.

(2) What’s a game that the majority hates that you genuinely like?

My answer: I’m not sure I have just one, but here’s a big one that definitely stands out: waking up on Christmas morning, 1996, to a brand new Nintendo 64, with the four then-new Nintendo plushes (Wing Cap Mario, Bowser, Donkey Kong and Yoshi) to go with it. Super Mario 64 on Christmas day… life can be kind of cool some times.

My answer: Ooh, good question! Once again I kind of have to cop out though, since I don’t think I can pick just one thing. I love writing reviews for both games and movies, and I really enjoy making top 5 and top 10 lists (even if I only seem to do them once every blue moon). And naturally, I like writing blogs like this one, where I can just write a bunch of crap and not care too much, and then pelt you with gifs.

(5) What’s the one thing that irks you about the WordPress writing community? If anything at all?

My answer: Admittedly, I don’t read a whole lot of blogs outside of my small social blogging circle. So I really don’t have a lot to complain about (I’m sure I’d have plenty though if I broadened my blog-reading horizons). Though I suppose it irks me that more of the WordPress writing community doesn’t read my stuff!

My answer: Yes I do, though I admit I haven’t exactly watched a whole lot of TV shows for a while now, and that includes anime. I can say though that I enjoy the films of Mamoru Hosoda, and the late Satoshi Kon. So I guess you could say I really like “Ebert List” anime (as some have dubbed them). But I also enjoyed shows like Cowboy Bebop, the original Dragon Ball (Dragon Ball Z is more of a “guilty pleasure”), One Piece, Outlaw Star, and the honor of “show of my childhood” has to go to Digimon (mainly the first season, but also the second. The third season was garbage). I’ve seen a good deal of others as well, but sadly I’ve slowed down as far as series go.

My answer: Yes I do… but first I need to buy it. I’m a bit inundated with games I want to review at the moment, and a bit short on cash-money, but it’s definitely on my list og games to catch up on in the not-too-distant future.

My answer: Super Mario RPG: Legend of the Seven Stars.

My answer: The Sega Genesis (AKA Mega Drive). Though I do have fond memories of the Saturn and Dreamcast as well.

(4) Do you read manga at all? If so, what are you currently reading?

My answer: Once again, I have read manga in the past, but I haven’t really read anything in a while. Unless we’re counting the recently-released collection of the Super Mario Adventures comic. Then there’s that. Otherwise, I have catching up to do.

My answer: Hmm…That’s a tough question. I used to own E.V.O. on the SNES and The Misadventures of Tron Bonne on the Playstation, but they are now in my brother’s possession. I’m sure I still own some rare gems in a box somewhere… But, if we’re just talking about a rare find and not necessarily a rare game itself, I own a factory-sealed copy of DKC2.

Well, that’s it for the answers to the questions, and I’m really not sure what else to write about here. So I guess I’ll just end with another big thanks to all my readers, but even more importantly, an even bigger thanks to myself! I got to 400 blogs! Wahoo!

Okay, I guess you guys are pretty cool too… I guess.

In all seriousness, I thank you from the bottom of my heart for taking even just a few minutes out of your day to read the stuff I write. It means a lot.

Now I guess I better get to writing the next several hundred blogs or something.