Pixar has been in an interesting place over the past few years. In the 2000s, it seemed like no one in the animation business could approach what Pixar was achieving with feature after feature. The 2010s, on the other hand, have been a bit less consistent, with their parent company Disney seemingly taking the animation crown for themselves. Toy Story 3 got things off to a strong start, but Cars 2 marked the studio’s first real dud. Brave wasn’t bad, but well below what we had come to know the studio for, and The Good Dinosaur is probably second only to the aforementioned Cars 2 at the bottom of the Pixar ladder. During the last few years, Pixar has also relied heavily on sequels: Monsters University was a fun if uneventful prequel to Monsters, Inc. Cars 3, though far from great, was an improvement over its dreadful predecessor. Finding Dory was perhaps Pixar’s only non-Toy Story sequel that matched up to its original, though even it wasn’t the most ambitious Pixar feature. Somewhere in the middle of all this though, Pixar released their most original, imaginative and (in my opinion) greatest feature in Inside Out. So while Pixar may not quite boast the inhuman consistency in quality they once did, they’re still more than capable of delivering the magic they once did so regularly.

Where exactly does Pixar’s most recent feature, Coco, fit into this equation? Well, it’s certainly the famed studio’s most original outing since Inside Out, and probably comes in second place (again, to Inside Out) in being Pixar’s most imaginative feature. Its plot does have some shaky elements that the studio’s best features usually lack, but in terms of emotional resonance and that indelible Pixar magic, Coco is up there with anything Pixar has created before.

Coco revolves around the Rivera family. Miguel (Anthony Gonzalez) is the youngest member of the family, and dreams of being a musician like his idol, Ernesto de la Cruz (Benjamin Bratt). Miguel’s dreams clash with his family, however, as the Riveras have banned music for generations, after Miguel’s great-great-grandmother’s musician husband abandoned her and her daughter, Coco. Understandably, the family has long-since erased the great-great-grandfather from their lives, and Coco – the only living relative who could remember him – suffers from severe memory loss at her old age (it is implied, though not explicitly stated, that she suffers from Alzheimer’s).

During Dia de los Muertos, Miguel happens to stumble upon some clues as to the identity of his long-forgotten great-great-grandfather; none other than Ernesto de la Cruz himself! Now more determined to become a musician than ever, Miguel confronts his family which, as you may have guessed, doesn’t go too well. After an argument with his grandmother, Miguel runs away from home, and looks to borrow Ernesto’s famed guitar from the singer’s mausoleum to use in a talent show to help his dream come true. But by “stealing” from the dead, Miguel has brought a curse upon himself, becoming invisible to all the humans around him. 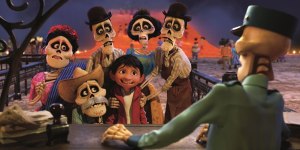 Luckily for Miguel, many of his deceased ancestors are visiting the area for Dia de los Muertos. The spectral skeletons are able to see the boy just fine, but recognizing that he’s still alive, take Miguel to the Land of the Dead in order to find a way to send Miguel back home. Miguel can return to the land of the living with the blessing of one of his ancestors, but when they all add the condition that he must give up music when he gets back, Miguel leaves to find Ernesto de la Cruz in order to send him back home while still being able to keep his dream of becoming a musician alive.

Along the way, Miguel meets up with an old friend of Ernesto de la Cruz, Hector (Gael Garcia Bernal), a skeleton who’s in danger of being forgotten in the land of the living, which would result in him vanishing from the land of the dead (the “final death” as the skeletons refer to it). Miguel and Hector team up, with Hector having connections to Ernesto de la Cruz, he can help Miguel get home. In exchange, he gives Miguel his photo to be taken to the land of the living and be put on his family’s ofrenda for Dia de los Muertos, thus ensuring he won’t be forgotten.

In case my lengthy synopsis of the setup weren’t evidence enough, the story of Coco is a bit complicated compared to most Pixar fare, at least in terms of setup. Using Dia de los Muertos as the backdrop for the story makes for both imaginative storytelling and eye-popping visuals, with the locations of the Land of the Dead being up there with the world of Riley’s mind of Inside Out as one of Pixar’s most vibrant and beautiful creations.

The only real downside to Coco is that, in order to make all these world-building elements around Dia de los Muertos work with the plot, the story does have to jump through some hoops in order to work properly (I can understand why the spirit of Miguel’s great-great-grandmother wouldn’t send him back unless he gave up music, but the fact that his other ancestors are afraid to do so just seems overly convenient).

That’s not to say that I have too many complaints with the story. As stated, all of these issues occur in the build-up, and the payoff ultimately makes it all well worth it. But most of Pixar’s best features seem to come together flawlessly. By comparison, Coco’s story may ultimately prove to be a beautiful structure, but it’s on a bit shakier foundations.

Again, these are all quibbles in the end, because when Coco works, it works wonders. The animation is among the best Pixar has ever created, and it is also arguably the best Pixar feature to listen to, with a host of songs written by Robert Lopez and Kristen-Anderson Lopez, the duo who helped make Frozen Disney’s best musical.

Most importantly, Coco lives up to Pixar’s legacy of heartfelt, emotional storytelling. Miguel and Hector end up being some of Pixar’s most likable creations, and the film boasts some heavy themes about death, family and remembering lost love ones. Appropriately, with such subject matter comes some of Pixar’s biggest emotional punches (and boy, is that saying something). In discussions of Pixar’s most heart-tugging moments, it’s usually the opening montage in Up and the ending of Toy Story 3 that are most frequently mentioned (perhaps not surprisingly, I’m partial to the entire third act of Inside Out). But I think the ending sequences of Coco stand next to Inside Out in being the most emotionally powerful and meaningful material in the Pixar canon. During my first viewing, I don’t think there was a dry eye in the theater when Coco’s credits started rolling.

It’s often said that the journey, not the destination, is what’s important. And while that may often be the case, Coco is an example of a flawless ending justifying whatever missteps the journey may have. That’s not to say that the journey of Coco is a troubled one – there are only a couple of bumps in the road early on – but when all is said and done, you’ll probably forgive them for being there, considering what they lead up to.