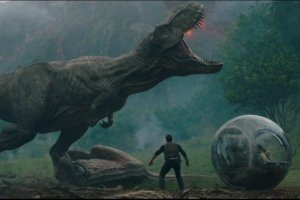 So I saw Jurassic World: Fallen Kingdom for the second time last night, and I actually enjoyed it a lot more the second time around. Though most of my complaints still stand (the Indoraptor is not nearly as memorable of a movie monster as the Indominous Rex, too much of the film takes place in the Lockwood mansion, etc), I just thought it was a more fun film this second time around. Still not as good as the first Jurassic World, which is still one of my favorite popcorn movies of recent memory, but more enjoyable than I thought it was the first time around.

Of course, this has me considering if I should make some edits to my review of the film. Nothing major, mind you, but maybe enough to showcase my newer appreciation for the Jurassic World sequel. Normally, I hate changing my reviews (outside of correcting spelling and grammatical errors, and lord knows I have to go back and do that often), but it’s not like I’ve never done it before. Opinions do change, after all.

This also got me thinking of another 2018 movie I’ve been thinking differently about from when I first saw it, but in this case, for less positive reasons. This film is Deadpool 2, which I find myself liking less and less the more I think about it. Yes, I do think it was an improvement over the first Deadpool, and I think that it is decently well made for what it is. But the more I think about it, the more I wonder if I like what it is. I don’t hate it, but the whole self-referential/deprecating humor of movies has run its course in my book. In this internet age, when things are mocked for taking themselves seriously, entertainment and media has followed suit, insisting on mocking themselves to “stay cool with the kids,” as it were. This isn’t saying I have a problem with humor. A movie can still be a comedy or even a bit of a stupid entertainment, and still take itself seriously (perhaps “genuinely” is a more accurate word?).

But the more I think about it, the more I feel that all Deadpool is is self-referential jokes. There’s only so many winks and nudges I can take from a movie. And just because you make fun of yourself for following easy tropes doesn’t change the fact that you’re still following those tropes!

Okay, now I’m getting a bit sidetracked. I suppose I’ll save my rants on modern media’s insistence on self-parody just to appease the cynical internet age for another day. My point is that I initially awarded Jurassic World: Fallen Kingdom a 6.5 out of 10, while I gave Deadpool 2 a 7.5. After consideration on Deadpool’s sequel and seeing the Jurassic World sequel a second viewing, I actually find myself wanting to flat-out reverse their scores. I haven’t quite decided on that just yet, so in the interim, I’ve altered both movie’s scores to 7.0s, until I can more strongly decide on whether or not to alter my reviews. Of course, some might say a second viewing of Deadpool 2 may be in order before making such a decision, but that’s just the thing. I don’t find myself particularly wanting to see Deadpool 2 again any time soon. Doesn’t that say something?

Does this dilemma of indecisiveness and possibly changing review scores make me a bad critic? Eh, maybe. But I’d also feel a bit lame if I felt my reviews no longer represented my opinions. Besides, it’s not like I’m altering something I thought was great and suddenly am claiming it to be terrible or vice versa or anything.

This whole ‘ordeal’ has opened up another can of worms, however, in that I’m once again considering changing my rating system from its current .5 state to a simpler whole number scale. With simple whole numbers, the possibility of altering a score just doesn’t seem quite as taboo. Then of course there’s my silly idea of the “mostly” whole number scale, in which it’s whole numbers, except the 9.5 score remains, both as a means to be a little cheeky and have some fun at the expense of people who are maybe a little too stingy with their scoring, while still being able to seriously retain the prestige of perfect and near-perfect scores. Because if my earlier sidetracked rant a few paragraphs earlier was any indication, I have a fondness for things that can balance sincerity and silliness.

Again, I’m sidetracked. Case in point: my complaints with Fallen Kingdom still stand, but I thought it was more fun the second time around, while Deadpool 2 seems less appealing with time, so I might change those scores. Hell, even Black Panther, one of the better movies this year which I scored an 8.5, is feeling more like an 8.0 to me. That is, if I keep that ‘.5’ differentiation at all.

So anyway, I thought I’d ask you, my beautiful, beautiful readers, your thoughts on the matter. Is altering scores and tweaking reviews too unprofessional? Or does the changing of opinions justify such actions, if even just on occasion? Am I a bad critic (even if I am, I’m gonna keep writing anyway. So that’s a moot point)? Feel free to leave your thoughts in the comments and whatnot.