Of all the great films Pixar has made over the years, there’s perhaps none more beloved than The Incredibles. The 2004 super hero feature – which still ranks above every super hero feature made since – garnered wild critical praise, and more importantly, became a cherished classic, but for very different reasons than most Pixar films. While the studio is often known for bringing audiences to tears, The Incredibles was instead an action-filled romp, but one filled with all the intelligence you would expect from the Pixar brand. It was also more adult than the studio’s previous features, dealing with issues and themes that would likely go over the heads of younger audiences. Perhaps most importantly, The Incredibles shifted Pixar and, subsequently, western animated features to a stronger level of auteurism. Brad Bird became the first outside director hired by the studio, and brought with him the concept of the film, which he had planned virtually shot for shot.

In a time when it seems every animated film and (even more so) every super hero film receives a sequel, The Incredibles seemed like the most likely Pixar candidate to receive a follow-up. Even when Pixar started producing more and more sequels, to the point where people questioned the state of the studio’s originality, The Incredibles was the Pixar sequel everyone wanted to see.

Audiences had to wait fourteen years, but Incredibles 2 finally became a reality. With Brad Bird returning as writer and director, the film serves as an absolutely winning continuation of the original, even if it doesn’t quite match it.

Almost tauntingly, Incredibles 2 begins mere minutes after the ending events of the first film. Three months after Syndrome’s defeat, the Parr family – the secret identities of Mr. Incredible, Elastigirl, and their children – are re-adjusting to civilian life, when the mole-like Underminer attacks, resulting in the Parrs getting ready to do battle with the spelunking villain.

That’s where the first film wrapped up, and fourteen years later, it’s right there that this sequel begins. Mr. Incredible, AKA Bob Parr (Craig T. Nelson), Helen Parr, AKA Elastigirl (Holly Hunter), and their children Violet (Sarah Vowell) and Dash (Huck Milner) are on the Underminer’s tail, all while protecting civilians and babysitting the youngest Parr, baby Jack-Jack.

Though the Parrs manage to stop Underminer’s devastating machinery, damage has been done to the city, and the villain escapes. Super heroes are still illegal in the world of The Incredibles, and this last, botched scuffle proves to be the last straw for the government, who shut down their ‘Super Hero Relocation Program.’ With their last relocation being a ‘modest’ motel, the Parr family is in a bind. 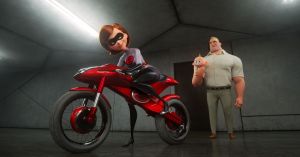 Luckily, Bob’s best friend Lucius, AKA Frozone (Samuel L. Jackson) happened upon an employee of eccentric billionaire Winston Deavor (Bob Odenkirk), who is determined to help super heroes regain legality. Deavor wants to meet Bob, Helen and Lucius to explain his idea of improving the public image of supers. Winston and his cynical inventor sister Evelyn (Catherine Keener) hire Helen has their first representative (her stretching abilities being less destructive than Mr. Incredible’s strength or Frozone’s ice powers), which puts her back in the super hero role just as a new villain, the Screenslaver (Bill Wise), is coming to prominence. This in turn makes Mr. Incredible  Mr. Mom.

The film takes a cue from previous Pixar sequels Monsters University and Finding Dory by promoting the original film’s deuteragonist into the protagonist, with Helen Parr and her escapades taking center stage, while Bob’s story takes a relative backseat as he tries to manage stay-at-home life with the kids, which turns out more difficult than he prepared for. Violet is having issues with her crush, and Jack-Jack – whose powers were revealed to the audience at the end of the first film but remained unknown to the Parr family – are becoming more powerful and varied. Perhaps the only downside in the plot is that Dash doesn’t have much to do compared to everyone else in the family, mostly providing comic relief, as the closest thing he has to his own sub-plot is trouble with homework.

But I guess not every character can play as large of a role, and Dash’s reduced presence is a small price to pay for the fact that the story frequently matches the structural perfection of its predecessor, as well as its intelligent writing.

Helen’s story serves as the main plot, and features action scenes that match the excellence of the Mission: Impossible franchise and some top-notch moments of dialogue between her, Winston and Evelyn. Bob’s story is a little more comical and low-key, but it still manages to bring out a lot of heart and character development in the film. And as you might expect, the plots eventually converge on each other, which only kicks things into high gear.

Of course, with Helen separated from the rest of the family for most of the film, that does mean we get less moments of the sharp banter between her and Bob, which is a little disappointing. The Incredibles movies are often at their best when they’re dealing with familial issues, and though the early scenes feature some memorable moments with every Parr family member, you do kind of miss the realistic arguments and conversations between the parents in the film’s middle act.

Again though, these are only quibbles in comparing these elements to their presence in the original Incredibles film, which is a pretty much perfect movie. So any of these narrative complaints are only relative.

Incredibles 2 may actually be the funnier of the two films featuring the super hero family. Unlike most animated sequels, which introduce a new comic relief character for marketing reasons, the primary sources of comedy are Jack-Jack – whose multitudes of powers exhaust poor Mr. Incredible – and super hero fashion designer Edna Mode (voiced by Brad Bird himself). Both were characters from the original film, with Edna once again wisely being used sparingly, and Jack-Jack getting a more prominent (and humorous) presence than in the first film. The only major new characters are Winston and Evelyn, as well as the villain Screenslaver and a spunky super hero named Void (Sophia Bush), all of which feel like natural additions to the Incredibles universe, as opposed to flashy new characters created to sell more toys because they’re new.

As stated, the action sequences are top-notch, proving once again that Brad Bird is one of the go-to filmmakers for A-grade action. Like the aforementioned Mission: Impossible films (which Bird has had a hand in in the past) and Mad Max: Fury Road, Incredibles 2 features action scenes that flow along with the story, instead of merely being attention grabbers that exist outside of the plot. Even with only two movies and fourteen years between them, The Incredibles may just provide the best action sequences of any super hero franchise.

Of course, in those fourteen years since the first Incredibles movie, CG animation has only gotten better, and Incredibles 2 certainly showcases how far the medium has come. Incredibles 2 features state of the art animation that rivals anything else out there right now. And with its uniquely stylized character designs, it may just outdo all of its contemporaries.

Much like the first film, Incredibles 2’s score evokes not only super heroism, but James Bond-style spy films and espionage as well. And just like the first go-around, it’s among Pixar’s catchiest and (dare I say it?) sexiest scores.

If Incredibles 2 falls short of the original, it’s only ever-so-slightly. But that’s only a testament to just how perfectly crafted The Incredibles was. Incredibles 2 really isn’t that far behind – suffering only from a bit of longing to see all of the Parrs together more frequently – and is very likely the best sequel Pixar has made since Toy Story 2. Its  animation and action set pieces may be outstanding, but they are merely complimentary to the strong storytelling and memorable characters. The shadow of its predecessor may be unavoidable, but Incredibles 2 more than lives up to its name.