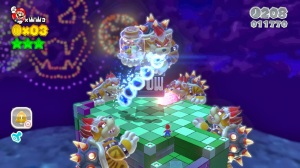 It’s not an exaggeration to say that 3D World was a vast improvement over 3D Land in every way. Basically everything 3D Land did, 3D World did way better, and brought with it a bag of its own tricks as well. And while the final boss in 3D Land was great, 3D World’s was all the better.

Now, 3D World also incorporated the whole three Bowser rule, but in a nice change of pace, the third and final battle is wildly different from the first two.

The first two battles – oddly spaced in the first and seventh worlds – see Bowser riding a sweet cadillac as he chucks bombs at Mario and friends. Naturally, you have to lob the bombs back at him, eventually destroying his sweet ride and sending the Koopa king, once again, down a pit.

Those fights are great and all, but the third is something else. With its final battle, Super Mario 3D World answered an old question: If Mario, Luigi, Peach and even Toad could gain super powers with power-ups, could Bowser? The answer is yes!

Super Mario 3D World introduced two new power-ups to the series: The Super Bell, which grants Mario and friends the Cat Suit, and the Double Cherry, which creates clones of whatever character grabbed it. The final battle sees Bowser take advantage of both new power-ups, using the Super Bell to transform into the tiger-like Meowser, and the Double Cherry to create a small army of such Meowsers.

The heroes have no choice but to run. The action takes place on a skyscraper during a stormy night (being one of the most beautiful showcases of the Wii U’s graphical powers to date), adding a nice atmospheric touch. Mario must also use the power-ups to keep ascending the skyscraper, and the action becomes so intense it feels like something out of a Platinum game.

Should Mario reach the top of the skyscraper, he meets up with the largest POW block in the series’ history, and he must hit it repeatedly before the Meowsers unleash a devastating final attack. When the POW block is destroyed, it creates a quake that makes every Meowser disappear, and the original Bowser is sent plummeting to another defeat.

If Galaxy’s Bowser combined the weird with the epic, than 3D World took that same ideology, and cranked it to eleven. 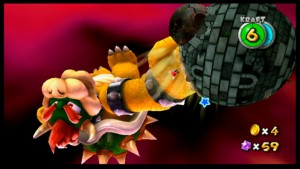 Super Mario Galaxy 2 puts up a huge argument to being the best Mario game ever made, and it appropriately includes some of the best Bowser fights in the series.

Bowser is much bigger here than he was in the first Galaxy, using the power of the stars to grow to an immense size. He’s so big in fact, that this time around Bowser doesn’t share a planetoid with Mario during their battle. Instead he hovers ominously above the planetoid, covering it in flames and electric shockwave before he flat out punches it with his giant fist! He punches planetoids! Put that on a t-shirt.

So how can Mario combat Bowser and his newfound size and strength? Why, by stomping small moons and sending them crashing into his face, of course! While the first Galaxy took advantage of gravity to create an epic battle, Galaxy 2 has Mario and Bowser manipulating gravity itself to one up each other. The third and final fight once again takes things to another level, with Mario and Bowser seemingly taking their fisticuffs into an interdimensional vortex. And somehow, the accompanying music goes toe-to-toe with that of the first Galaxy.

Those simple battles from the 8-bit days certainly have come a long way. No axes, no bridges. These are battles of cosmic proportions. 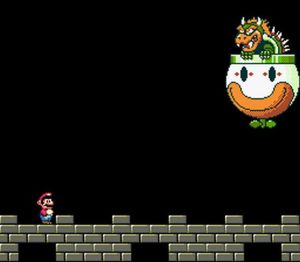 When it comes to the title of most iconic Bowser battle, the final boss of Super Mario World might just take the cake.

By this point, Mario had seemingly seen it all: flying raccoon tails, rideable pet dinosaurs, Goombas bouncing around in shoes, the list goes on. But Super Mario World provided the culmination of the weirdness of Mario’s early adventures.

After a hard fought adventure, Mario finally makes it to the end of Bowser’s castle, ready to face the villainous Koopa and rescue the fair princess yet again. But as Bowser descends onto the battlefield, looking scarier than ever with sharper teeth and horns, and eyes that lack pupils, there is a brilliant juxtaposition. Bowser may look scarier, but he’s now piloting a round, bouncing, smiling flying machine. The “Koopa Clown Car” became so iconic that it is now a recurring aspect of Bowser’s character.

Bowser would toss Mechakoopas at Mario, drop giant, iron boulders onto the battlefield, and try to squish the plumber by bouncing around in the Koopa Clown Car itself. But Mario could combat Bowser by tossing the Mechakoopas back at him. In between rounds, Princess Peach would emerge from the Koopa Clown Car to aid Mario with a power-up.

Super Mario World may not have the toughest final boss in the series. But if it isn’t the wackiest, I don’t know what is. 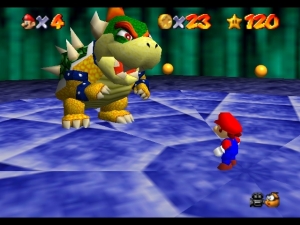 Super Mario 64 is not only one of the best Mario games ever, but also one of the most influential video games of all time. Its understanding of 3D game design was far ahead of its competitors, and despite being an early title in polygonal gaming, it was so intelligently structured and designed that Super Mario 64 remains timeless.

This understanding of 3D space could be summed up with Mario’s encounters with Bowser. Mario and Bowser fought in a circular arena. Mario would need to run around Bowser, grab his tail, and swing the Koopa King 360 degrees, and throw him into one of the surrounding bombs.

Super Mario 64 also established the unwritten rule of three Bowser fights for the 3D Mario titles (Sunshine didn’t get the memo). The first two Bowser fights in 64 were something like warmups, with Bowser only needing to be thrown into a single bomb before Mario would wrest one of the castle’s keys from him. But the third fight, with Bowser’s full arsenal of attacks and draculian music, is as epic as it gets.

Super Mario 64 is a legendary video game for how it paved so many roads for 3D gaming and wrapped it up in a timeless fairy tale. This combination of gaming excellence and fantasy is personified with Mario’s trio of clashes against Bowser.